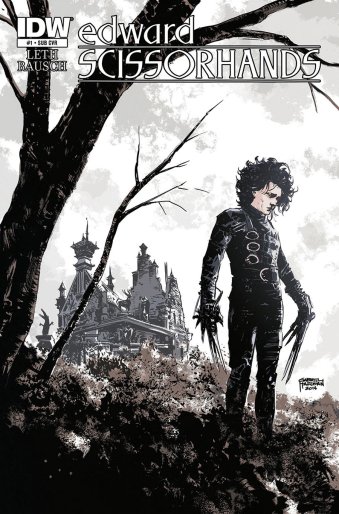 So I just finished the first issue of the new Edward Scissorhands comic book mini-series and I have some  mixed feelings on it.

It takes place many years after the events of the film. As I’m sure you already know, at the end of the film we see Winona Ryder’s character Kim as an elderly grandmother telling her granddaughter Megan about Edward and everything that happened upon his discovery.

This new story opens up with Megan, now a teenager, dealing with the death of Grandma Kim and her mother’s claims of Kim’s insanity and denial of  Edward’s existence. She attempts to learn more about her grandmother and Edward by going through some of her things. Most people have forgotten what happened, some believe he was a murderer who did kill Jim and everyone else thinks he didn’t exist and is a sort of urban legend.

However, we know Edward is innocent and he is very real and still very much alive, living in the mansion on the hill. After the events of the film, Edward disappears back into the mansion and has become more reclusive and socially inept than before. He becomes even worse after hearing that Kim passed away. He spends most of his time exploring the mansion and one day finds plans left behind by The Inventor for another creation similar to himself. He finds this creation (how after all these years he never stumbled on him/it before is beyond me) and attempts to fix him up.

A fairly solid opener for a comic book sequel to a film that is now 20 years old. Author Kate Lesh completely captures the somber tone of Tim Burton’s classic, but Drew Rausch’s art almost took me completely out of the story. It was like watching an odd Saturday Morning Cartoon that took it’s inspiration from Burton’s concept art for the film and splashed colors from SpongeBob or the Fairly Odd Parents all over it. Now please don’t take this the wrong way. I am not bashing Rausch’s work as good comic book art, but it does not work here. It’s too soft and cuddly for the world of Edward Scissorhands, a film that has made me sob on more than one occasion.

We all know that the film has a lot of insanely bright colors, it works as a beautiful contrast to the bleak whites, blacks and grays that come from Edward’s world, but there is TOO much color here. I can understand trying to pull in younger fans of Tim Burton and that’s completely fine, but it just doesn’t work for me. I would’ve preferred something in the middle, not too dark, but not this cartoony either. I prefer Gabriel Hardman’s work, like on the variant cover pictured on the right. That’s the one I grabbed at the shop.

All in all a good start to this story. I’ll definitely be picking up the rest of the issues in this series. At times it took me back to watching the movie and being a fan of other work of Burton’s like Beetlejuice and Big Fish. Lesh definitely has a knack for channeling Burton.

Edward Scissorhands #1 is published by IDW Comics and is available anywhere comic books are sold. The mini-series is running for 5 issues.