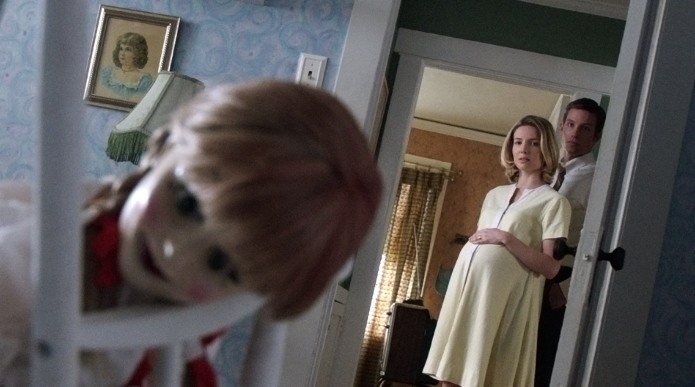 So I went to an advanced screening of Annabelle and I gotta say while not an outstanding horror film, it was much better than I expected it to be.

The point of this movie is to serve as a sort-of prequel/spin-off to James Wan’s mega-horror-hit The Conjuring. Personally, I see that film as one of the best horror movies of the last 15 years. It’s obvious that Warner Bros. knows that most of the public feels the same way which is why the marketing for this film relies so heavily on this film being connected to it. In reality, the only connection is their version of the Annabelle doll.

The film is meant to show us the origins of the Annabelle doll. Why it becomes evil, why it follows certain people around and eventually, how The Warrens ended up with her. The story opens a year before nurse Debbie and her roommate are terrorized by Annabelle. Dr. John Form [Ward Horton] and his doll collecting, pregnant wife Mia (one of many nods to Rosemary’s Baby) [Annabelle Wallis] are living in Santa Monica starting their life together. They go to church, have caring neighbors and are just happily loving life. Being 1969, the characters are shown in this strange limbo of moving out of a more wholesome time when people could leave their front doors unlocked and hearing about the Manson Family on the news (used in a more than exploitative manner here). One day John comes home with a special porcelain doll to complete a set Mia’s been putting together. She loves it, even though it’s quite hideous and merrily adds it to the collection.

The terror starts when, Annabelle Higgins, the estranged daughter of their next door neighbors returns with her crazy hippie boyfriend to wreak occult havoc on her parents. The carnage spills over into John and Mia’s home, with Mia being injured, crazy hippie guy getting shot to death by the police and Annabelle taking her own life while holding the latest addition to Mia’s collection. After this event, the couple is understandably freaked out and take a few extra precautions around the home. Being a haunted house movie, strange occurrences start up with the characters barely taking notice until a fire starts in the home putting Mia in the hospital and causing her to give birth a little early. She refuses to return to the house which is fine because John just got a job in Pasadena. So the perfect little family unit moves to a fancy apartment building near the hospital, but of course things only get worse from here. With the help of a friendly neighbor and their priest, the Forms try to figure out how to end their problem.

This is a more than obvious attempt to ride the coattails of The Conjuring, but Annabelle is actually a decent horror movie. While there is a definitive plot running throughout, loosely based on the claims of the real-life victims, the film does focus more on creepy situations than bogging us down with a lot of dragged out exposition, though some exists. I’m more than fine with that. This movie is not meant to be taken as seriously as it’s predecessor, it’s a creepy doll movie. That’s it. Oh and there’s a ghost…and a demon…and Alfre Woodard running a creepy bookstore. Don’t go in with “horror classic” expectations and you’ll be alright.

The characters are believable enough and it was nice seeing some lead actors that I’m actually unfamiliar with, other than Alfre and Tony Amendola who played Father Perez. Overall the film did rely on a lot of cheap scares, but it did manage to pull out some truly terrifying moments and imagery as well. The score and sound effects help move the scares along as you would expect and the best moments are the ones that use the “less is more” angle. Being that the director is a long time collaborator of James Wan, some instances were reminiscent of Wan’s work, which is great being that this exists in a world they both shaped for cinema. From time to time you will get a sense of “been there, done that.” Either from the stylistic tones that are clearly lifted from everything Wan has done, especially Insidious, or from the homages to horror classics, but it’s OK. This movie is still a fun, creepy ride that stands on its own, even if you haven’t seen those other films. I also really enjoyed some of the plot twists throughout. Some things actually left me guessing and I appreciate that. I can’t have all of the answers all of the time.

A true stand-out sequence that I can only call the basement/storage room/elevator scene was comprised of fantastic imagery that I haven’t seen the likes of since the original A Nightmare on Elm Street and Silent Hill 2 (the game, not the terrible movie sequel). The direction of the scene leads you down various paths so you think you know what’s going to happen next, but your expectations are cliché, and thankfully, not used. If you’re not crawling out of your seat when the elevator doors open, you never had a childhood fear of what lurked in the dark. This scene alone was almost worth the price of admission. It owes something to the two horror masterpieces I just mentioned as well as Rosemary’s Baby again.

A thought that stands out in my mind, as far as scare quality goes, is that I do not have that sense of dread making my way through my darkened house to climb into bed. That deep-rooted fear that a great horror film gives you after a late night viewing; it’s just not there this time around. However, the film did make me jump a time or two and gave me the creeps while I was viewing it and it was fun while it lasted. It’s a serviceable film, but probably won’t be remembered many years from now. If you are a big fan of these films I have to recommend seeing this. If you’re still unsure, you can always grab a cheap matinée or wait for a rental.

Maybe it’s because I initially had such low expectations, but I’m gonna give this film a solid B.

Annabelle is directed by John R. Leonetti, with James Wan serving as Executive Producer this time around. The film opens everywhere Friday October 3, 2014.